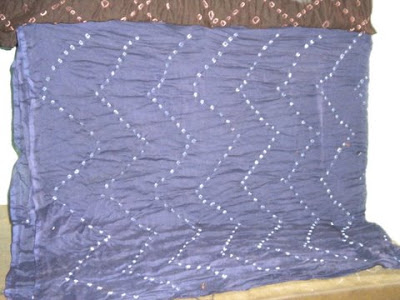 OCT 16 2011
Reviving a heritage craft
by Sabita Radhakrishna
We, as the self-appointed guardians of heritage, zealously try to protect the vestiges of heritage in whatever forms – buildings, monuments, craft or textiles – which speak volumes of history, each a learning lesson for generations to come. Alas, most Indians do not share this passion. Take Chennai. Where do we have museums which showcase our rich tapestry of history? For instance, when we visited the museum in Pondicherry, I was pained to see the famed Arikamedu coins lying in a dusty glass case. So too were some old valuable paintings. This was a few years ago, and I hope things have improved. Why has the Museum in Chennai not given enough funding to showcase some of the finest craft and heritage textiles that we have? Yes, we have the finest of bronzes, but how are they showcased?
Most of the museums I have visited in the world showcase their heritage in a manner that just grabs the eyeballs. In Dubai, its history is so expressly recorded in its little museum that it is a joy to revisit it. Mercifully, however, some of us craft activists, while deploring the state of heritage consciousness – or the lack of it – in our country, are passionate about revival and resuscitating languished craft and textiles. Some of us work with leading craft NGOs like the Crafts Council of India, which today is a powerful apex body run by a group of dedicated, committed women.

Sungudi sarees.
Take the Madurai Sungudi, for instance. It all began in the days of the Nayaks, when weavers and artisans from Saurashtra and Gujarat were brought to Madurai to work on the craft of Sungudi which was likened to “stars in a midnight sky”. The Pattunoolkarar, as the migratory weavers were called, worked in silk basically and supplied fine silk and soft muslins to royalty. When the Nayakdoms were established by Emperor Krishnadeva Raya in the South, the Pattunool community, which was originally from Saurashtra in Gujarat, came to Madurai and Thanjavur in the beginning of the 16th Century. The Sungudi tradition disappeared elsewhere but continued in Madurai.
What is Sungudi? It is the art of tying tiny pinches of fabric with thread and dyeing the fabric. When opened out, the tied portion retains the original base colour while the rest absorbs the dye. Women of the past two generations loved wearing the soft sarees with an inch of zari on both sides, splattered with tiny white dots. The only place we knew where to get these sarees was Rangacharis in Mylapore, in traditional colours of manjal, arakku or neelam, with the borders clamped dyed in contrasting colours.
The traditional Sungudi craft is very akin to the Bandini of the North, but is more basic. The basic design is first plotted on the fabric in a grid pattern. The women grew long finger nails and used them to pinpoint places where the tying was required. Over the years, Madurai Sungudi languished. A revival project launched by the Crafts Council of India, through the World Crafts Council, called for research, training and, ultimately, providing a ready market for the goods produced.
This was always my dream project, which took root thirty years ago but never took off due to attempts having been made at the individual level only. I would make it a point to meet the traders and shopkeepers on every visit to Madurai to find out why we could not locate artisans to do the Sungudi tying. The women confessed that tying the fabric was boring, and that they would rather watch TV serials than doing the job, or they would say that they were paid a pittance for the work done. The traders did not want to create products for a niche market and the market collapsed. The traders turned to wax resist printing, where even the irregularity and unevenness of the dots were built into the blocks. Only a very discerning eye could differentiate between an original and a fake. The wax printed Sungudi saree’s price ranged from Rs.250 to Rs.500, whereas a real Sungudi could sell for as much as Rs. 4000! Today you can pick up a wax printed Sungudi anywhere in Madurai, and the traders admit there is a large turnover for the product.
The revival project spearheaded by the World Crafts Council members – President Usha Krishna, Sudha Ravi, Dalley Verghese and Rajam Subramaniam – saw a two-week workshop in Madurai recently where women were trained in the art of Sungudi dyeing. The rates for the Sungudi tying were suggested so that the artisan was not exploited. Believing that a workshop needs a follow up, there was another two-day workshop at Stella Maris College for the Arts students of the College as well as Kalakshetra Foundation students and some of the staff. The girls were trained by the Madurai women who were initiated into this art.
With every revival project, it is only a ongoing follow-up, addressing the problems, if any, together with provision of a steady market platform which will lead to a total resurfacing of the languished craft. The WCC and the Crafts Council of India held an exhibition-cum-sale of all yardage and sarees produced during the workshops at the Apparao Galleries, Wallace Gardens, in early October. The exhibition was supported by the office of the Development Commissioner (Handicrafts), Ministry of Textiles, Government of India. Several traders attended the exhibition and displayed their interest.
We should take the cue from the Bandini products of Gujarat and Rajasthan which have been flourishing over the years and which have now diversified into contemporary products. Madurai Sungudi should also likewise make a presence in the world market and it is the discerning public and the craft enthusiasts who can help us reach our goals and restore the craft to its old glory.

Posted by Sabita Radhakrishna's blog site at 3:29 AM

Email ThisBlogThis!Share to TwitterShare to FacebookShare to Pinterest
Labels: On reviving a precious heritage

Sabita Radhakrishna's blog site
too many interests. 24 hours is not enough in a day,and I am a gregarious person, like to communicate with my friends, and keep in touch, I like to be tech savvy and it is a challenge getting to know the various options say in a computer. My grandchildren help!!!